Chris Jordan is a photo artist who tries to use art to get us thinking about big numbers. This is the explanation on his site for his Running the numbers: an American self-portrait project:

Running the Numbers looks at contemporary American culture through the austere lens of statistics. Each image portrays a specific quantity of something: fifteen million sheets of office paper (five minutes of paper use); 106,000 aluminum cans (thirty seconds of can consumption) and so on. My hope is that images representing these quantities might have a different effect than the raw numbers alone, such as we find daily in articles and books. Statistics can feel abstract and anesthetizing, making it difficult to connect with and make meaning of 3.6 million SUV sales in one year, for example, or 2.3 million Americans in prison, or 32,000 breast augmentation surgeries in the U.S. every month.

This project visually examines these vast and bizarre measures of our society, in large intricately detailed prints assembled from thousands of smaller photographs. Employing themes such as the near versus the far, and the one versus the many, I hope to raise some questions about the roles and responsibilities we each play as individuals in a collective that is increasingly enormous, incomprehensible, and overwhelming. 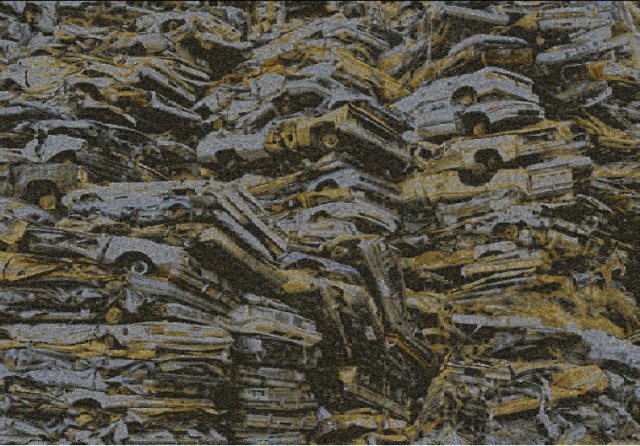 Weirdly enough I find his words more convincing than his art, although I really like some of his pieces. So visit his site because you can then zoom in to fully admire the intricacies of his creations.


Looking at his work and listening to his presentation focused my attention on what visualizing is at heart: something that really happens in your mind. It may be triggered by a visual, but also by words, and input from any of the other senses. Which brought to mind a recent fascinating read:  David Abram‘s The spell of the sensuous. So indulge me with a short detour about this poetic and very convincingly argued philosophy of the flesh statement which goes beyond what the coiners of that term, George Lakoff and Mark Johnson, have described. Most would Categorize Abram as in the far out fringe of new age counter-culture. Unfortunate, because the core of his arguments is a pretty much factual statement about what modernity does to our ability to attend to all our senses.

For those open to Abram’s approach to things, see the man in action:

Back on topic: a final example of where a visual doesn’t add much to the evocative power of the words. The words already add the required depth of understanding that just digesting the numbers doesn’t do. And what makes this a powerful example for me is that the numbers are not huge. They show that we really are one-two-three-many thinkers. This one is about the inequality in pay scales in the US. In general, CEO pay is in the 270 times the average worker pay range as the graph below shows. Granted, it’s a powerful graph because of its longer term view of things – not because 270 in itself is going to tell us very much (25 times is already a lot isn’t it, and I know that 100 is more than 25, and 270 is more than 100, but just how much more is not really conveyed by the numbers alone):

Recent analysis has looked at 100 fast food and retail companies, and then zoomed in on the 10 that paid their CEO the most.  This is the tabulated result:

So the way they translate these huge disparities is in the number of over-time months an average employee has to work to match one hour of his CEO’s pay. And note that not taking the overtime pay rate (1.5 times normal) as the basis for the calculation would increase the number of months with another 50%. Which is what the below visualization of the disparity did:

For me the normal pay rate is indeed a more powerful comparison, but the picture in itself doesn’t add much to the words. The translation of comparing a small and a big – but still very “normal” number – with each other into the time it would take for the small number to become the big number: It takes the average McDonald’s worker seven months to earn what its CEO makes in just a single hour, is what brings these numbers to life. I’m not sure that visualization is the best word to describe what the words do. But they certainly do something that the numbers in and of themselves don’t. And of all the senses, the visual has most affinity with this mental something.

1 Response to visualizing with words