wondering about Cairo, episode one

There is plenty of things that I find remarkable about Cairo, which I might not find remarkable anymore in a while so let’s start documenting them. Episodes are going to be like my preferred dishes, stews of diverse ingredients that add up to something distinct. Let me start with the phenomenon of the car-that-disappears-into-the earth. 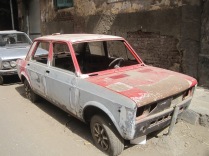 There are countless of them on Cairo streets, some in use as storages, many just uselessly rotting away. What I see is lots of money lying around. In a city with a huge recycling industry that makes one wonder. My language teacher explained it as a sign of the economic crisis: owners currently don’t have the money for repairs but will do so after having saved enough. Didn’t sound convincing to me…

Then there is the issue of air quality. Cannot leave that unmentioned after having ranted about Kathmandu earlier. Not easy to find reliable recent hard data on how Cairo compares to other places, but the little one comes across googling suggests a position high on the list of the worst. Experientially I can relate to that because the morning air in our neighborhood smells of chemical factories, jogging the streets leaves me with a burning nose and a gritty foul taste, and even running the Gezira club track, which is the largest green space in central Cairo, on Zamalek, an island in the Nile and the richest urban neighborhood in the country, although better (it feels sort of OK to regularly open one’s mouth) in no way provides the escape that any other big city park that I have visited does (e.g. New York’s Central Park, Bangkok’s Lumpini Park).

Given this state of affairs two things really amaze me:

Any other place I’ve been to with such air has citizens covering their faces with masks, and looking positively disturbed if a particularly bad cloud of undigested diesel is hitting them. Cairo, zero masks and total oblivion….Also, anywhere else I’ve been even the lower middle class would avoid street food unless fresh and not lying around uncovered for longer periods of time. Cairo, exposing food to the city’s fumes for long periods of time seems no problem. Plenty of what look like well dressed office workers munching away on food that has been in the open next to, and I mean really next to major traffic arteries.

There is lots to say about Cairo’s traffic but one thing to comment upon in this first episode is the incredibly cheap public transport. A ride on the metro, a major factor in the explanation of how the city has escaped total gridlock, costs  1 Pound (currently 11 euro cents), a comfortable ride on a private minibus, another part of that explanation, e.g. from the main road outside Sheik Zayed city to Libnan square in Mohandeseen (more than 20km) cost me 2 pounds yesterday. Metro’s are life savers elsewhere too but Bangkok or Delhi prices are incomparable, and Kathmandu valley private mini buses are equally cheap but fill up with at least three times the number of bodies and cannot in any way be described as comfortable. The low price of fuel must be a major explanation in the minibus story.

Something Cairo shares with plenty other places is it’s citizens’ craze for western junk food. That mcdonalds, pizzahut and other chains manage to serve their over priced garbage in poor environments like this has always amazed me. Back home it’s comparatively cheap food, here it’s up there, part of the fancy restaurant scene. Maybe I should see it as a positive: we’re all the same, offer us sugar and fat and we go bananas.

@Marjan Slaats: mosaics on the wall of Arts college in Zamalek 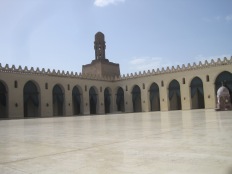 Let me end with contradicting some common wisdom about Cairo’s streets. It’s one of the most compact metropolitan cities world wide with a car density still way below that of some others like Bangkok but high enough to make for streets and side walks clogged with parked cars. Nevertheless, wandering about Cairo’s streets is not to be avoided but by far the best way to enjoy the city. At walking pace the city’s air is bearable, and because it’s compact most of Cairo proper is within walking distance. The sights are endless and fascinating, never a dull moment.

I couldn’t end the post about my first impressions of Egypt’s politics with an upbeat diversion so let me make up with Gangnam Style of the 1980’s, the oddly appropriate and silly song by the Bangles that happens to be on my ipod shuffle collection for providing cadence to my Gezira track runs.

Still figuring out the story line that would satisfy myself here. Listening to what my family and friends evoke, what the words I absorb, the images that move me, the movements that still me, point to.
View all posts by roger henke →
This entry was posted in personal and tagged Air pollution, Cairo, Gezira club, recycling, The Bangles, Traffic. Bookmark the permalink.

4 Responses to wondering about Cairo, episode one